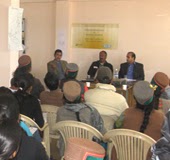 As a part of Pragya’s rights based initiative supported by UNDEF, a Citizen Government Meet was conducted in Kinnaur to facilitate interaction between the health department and the citizens. The interactive session and constructive dialogues enabled the people to become aware of the various health related government schemes and provisions and to raise concerns regarding the services of the department. The event, attended by 38 participants, included representatives from 18 villages in upper and lower Kinnaur, members of the High Himalayan Forum (HHF), NGO representatives from across the district and officials from Integrated Child Development Services (ICDS) and Auxiliary Nurse and Midwives (ANMs).

The meeting started with a brief presentation of Pragya’s rapid participatory assessment of the healthcare status in Kinnaur district. Following this, Dr. S.S. Negi, representing the Health Department spoke about the National Rural Health Mission (NRHM) and the schemes available for citizens in Kinnaur. Concerns raised during the interactive discussion session regarding the status of Primary Health Care in remote villages included: lack of gynecologists at block level, incapacity of medical personnel and lack of knowledge regarding the major schemes for pregnant women and children among the community members. A request was put forward for the department to conduct more health camps at the block level instead of village level, where surgeries and eye-checks could be done. The issues raised were documented by the representatives from the health department and they assured further interventions in coordination with the state level machineries. (More about related efforts by Pragya)
at November 25, 2011 No comments: