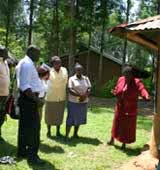 Taking forward Pragya’s initiative to address the needs of communities in remote areas of the East African highlands and the indigenous peoples of the arid savannah lands in the region, Ms. Gargi Banerji and Mr. Sunil Pillai visited Kenya and held discussions with stakeholders in the target region.

The stakeholders they held discussions with included representatives of the NGO Coordination Board, ACORD, DFID and ICIPE. Field visits took them to Kisumu district in Nyanza province and Kakamega district (highland area in the Western province of Kenya), and they visited the programs run by WEAEP, a local NGO, and the Muliru Farmers Cooperative. They also visited the Il Ngwesi community (Maasai people) in the remote parts of Laikipia district (arid lands in the Great Rift Valley), where they interacted with traditional healers and studied village water needs. Pragya plans to consolidate the relations built during the visit and take its development actions in East Africa a step further.
at April 16, 2011 No comments: