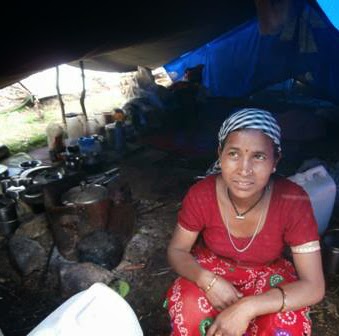 At midnight 3rd August 2012, Uttarakhand was hit by torrential rain following a cloudburst in Siyari Gar and Sangam Chatti in Uttarkashi district. The resulting flashfloods and landslides caused unprecedented loss of property and life in the Garhwal region which had to bear the maximum brunt. Estimates suggests approximately 1700 families have been affected from Gangotri to Uttarkashi; in Bhatwari block itself, one of the worst affected areas, more than 25 villages have been affected including 1188 families. Several areas are inaccessible as road and bridges have been washed away, making relief operations difficult. Extensive damage has been caused to agricultural land, irrigation infrastructures, water and power supply systems, houses and community buildings and many families have lost all their belongings. Surveys and visits are being carried out in the region to get an exact estimate of the damage caused. Relief camps have been set up in several areas in Uttarkashi. (Read more) (Photographs from flood hit districts)

There is a major need of essential supplies in several areas, especially the need to communicate and provide relief to those in the still inaccessible and remote areas. Pragya is presently contributing towards this effort by gathering data in order to get a comprehensive picture of the damages caused with the aim to provide immediate relief materials to the affected in form of hygiene kits, tents, bedding, water tanks and water purification tablets, solar lanterns, food, especially baby food and toilets and for carrying out rehabilitation programs in the long term. (More about Pragya's efforts) (Photographs from the field)
at June 22, 2013 No comments:

Pragya India is now recognised as 'Scientific and Industrial Research Organisation' (SIRO). The Department of Scientific & Industrial Research (DSIR), under the Ministry of Science and Technology, Govt. of India conferred this status to Pragya for 2013-2016. This is expected to strengthen the research & extension activities carried out by Pragya team in India.
at June 15, 2013 No comments: