The Himalayan district of Chamoli, Uttrankhand, India is a breathtakingly beautiful place. Over the years it has become a dwelling area for migrants hailing from states like Bihar, Jharkhand and the neighboring country of Nepal.  They carry a lot of hopes and expectations to live a better life for themselves and their family. But unfortunately, safe enabling living conditions to the workers here are limited. They live in shabby, cramped, unsafe homes in unhygienic conditions, and face painfully cold and harsh weather more often than not. To add to this, they often end up working in exploitative and hazardous working conditions. 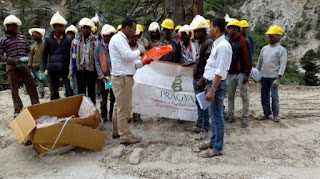 Migrants working here face more than just the physical strain but are also plagued by a variety of health implications ranging from weakness, back and joint pain to concrete burns, cuts, as well as chronic illnesses such as COPD and TB. While working, they are exposed to dust and asphalt fumes without protective clothing, naturally leading to endemic health issues including eye, heart and lung diseases. The construction workers especially women suffer through skin diseases and infections. At times children are also present at the worksites, who are more vulnerable to catch common illnesses and infections compared to adults. Unfortunately, none of the authorities are interested to hear their health concerns and provide a solution.

“We regularly face sliding rocks and mud. Many times we have suffocation and allied breathing problems due to sudden inhale of mud. To protect from mud we use homemade mask, mainly consisting of handkerchief or piece of cloth. This is insufficient as we feel suffocation after few minutes and remove them afterward. Some of us have reported coughing problems. Doctors at GREF has also advised us to wear the mask and protect from inhaling mud particles.” Says Gulu Marik, 25 years working in Malari Camp.
Pragya did a study of the hazardous work conditions and activities of the migrant workers in Chamoli. It was assessed that workers are not really provided with the necessary equipment while working in risky conditions which makes them vulnerable to various harmful health hazards as mentioned earlier. In view of that, the safety equipment distribution drive was planned, intended to reduce the mal-effects of occupational hazards and to ensure that they are able to protect themselves from other health hazards. 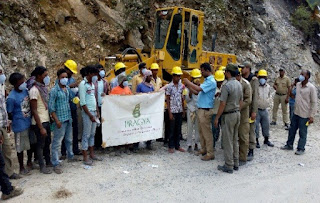 Pragya distributed safety kits and first aid kits to the migrant workers across six camps of migrant workers in Chamoli district of Uttarakhand. The camps covered were in Birajkund, Birahi, Surai Tota, Long, Bhapkund and Malari. The workers were trained on health and hygiene, safety and first aid.
Reaching out to and training 578 migrant workers happened in an organized way. 600 safety kits and 12 first aid kits were distributed. Workers were provided with protective gear that includes vital protective and safety equipment like helmets, gloves, along with the relevant demonstration. The first-aid kit includes the necessary health equipment and medicines in case of an injury and burns. Through a session on health and hygiene workers were made aware of health risks and the role of personal hygiene in preventing certain illnesses. Since dwelling spaces in these areas are unhygienic and open where awareness on these issues becomes a necessity. Hence workers were also informed on the symptoms, preventive and protective measures for diseases like TB and HIV. The workers many a time know the safety rules at a workplace but they seldom adopt it further risking their bodies to injuries.28-year-old Sarita Devi from Biraj Kund camp exclaimed, “We are not provided with any safety instrument while working such as helmets and gloves etc. I work along with other co-workers to remove silts, stones etc. We needed gloves and mask for my husband to protect from dust particle. Special thanks to Pragya to address our concerns, especially for helmets, gloves and masks.” 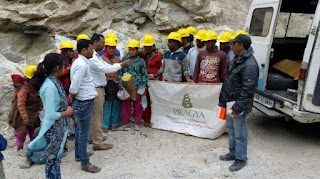 Knowing that there is a persistent lack of knowledge among migrant workers on the importance of health and access to basic health facilities, a role-play exhibited to equip the workers to be able to use the first aid kits provided to them. They were instructed on ways to stop bleeding, using first aid kit to treat minor injuries, and identifying the injuries that need a medical practitioner’s attention. Injuries related to environment and conditions like frostbite and trench foot, arising from cold and high-altitude conditions, were also given attention. This has helped these migrant workers to be self-dependent in case of health emergencies and prevent in escalating minor health problems to serious health issues.
A positive impact of the training has been seen while people adopting health and safety measures on their own where using safety equipment has become a daily habit among migrant workers in their workplace. Workers were found to be arranging equipment on their own as a ripple effect of the habit created through the project on using safety equipment while working and adopting habits of good health and hygiene in day today life. 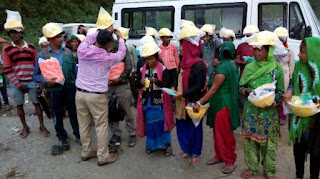 Women were seen relieved due to the provision of gloves since earlier they were quite bothered with cooking food with their dirty and contaminated hands. Using gloves in their daily work has ensured the cleanliness and hygiene along with protection of hands from dirt, itching and infections. In Sarita Devi’s words who is 30 years old from Long camp, “During our work, we face multiple issues such as dust, mist and mud from cutting rock. Many times our fingers cut while hammering on rocks. Also, our hands get rough by putting in mixing cement and Portland. We always felt the need of First aid kit to be provided. I would thank Pragya for giving us first aid kit, having more of dressing.”


Although migration is universally a basic human right, safe living and working conditions were just a dream for these people. Pragya made an effort where it was needed most, and enabled a safe and healthy work milieu to these workers in a land where no one knows them.
at August 22, 2017 No comments:

Ms. Agnes Mulimi is a 35-year old mother of four children, living in rural Kenya. She had been practicing farming for 10 years before A Pragya intervention persuaded her to cultivate medicinal plants. In 2013, when Ms. Mulimi received one and half times more money from the cultivation of Ocimum (basil) and Mondia Whitiei (gondolosia) in one acre of land, as compared to that from cultivation of traditional produce, she decided to completely switch over to the cultivation of medicinal plants. Her success is no accident.

In rural Kenya, a majority of the population is dependent on the traditional systems of medicine and locals regularly consult the ‘daktari wa mitishamba’ or traditional healers. This belief in the power of medicinal plants has endured even with the increased access to western medicine. In the streets of Nairobi, the daktaris have set up shops right alongside the doctors who practice ‘western medicine’, vying with them for their patients.

Contrary to popular belief, the traditional medicines are not cheaper than western medicine, and many rare and valuable medicinal plants are foraged from the wild. In the Kakamega rainforest, which is one of the most densely populated rural regions in the world, people from the villages regularly venture into the forest, collecting firewood and other non-timber forest produce, including medicinal plants.

Following the success of Ms. Mulimi, many other farmers in the region have also switched to cultivation of popular herbal species. Their efforts are not only helping them to improve the quality of family’s lives, but also to reduce the impact on rainforests in the region. The farmers can now better feed, clothe, and educate their children, with enough money left over to invest in livestock. For Ms. Mulimi, it is a drastic change from the situation when she struggled to pay for her children’s school fee. “I plan to rent a piece of land to increase the area under cultivation. But more importantly, the children are happy because they can afford to wear shoes to school,” says Ms. Mulimi.
at August 09, 2017 No comments: