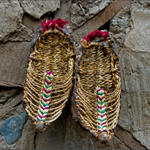 The traditional footwear of Lahaul & Spiti is the ‘Kapula’. Made from shoots of plants and animal skin or ‘pakpa’, Kapula was used round the year, particularly during the winters, where the temperatures can plummet to -20 degrees Celsius. The Lahaulis usually prefer kapula made of goat skin rather than sheep’s skin because the former is more durable and suited to the weather of the region. People used to wear jurab (traditional socks) made from pattu and bakza (pure wool) to cover their feet and the kapula was worn over that.

The kapula is made from shoots of plants like ‘gundum’ (local wheat), ‘beli’ (wild shrub) and animal skin. Shoots of gundum, known as ‘soma’, are first sprinkled with water and then twisted and beaten continuously with a ‘sodung’, a cylindrical wooden tool. It is beaten till the soma becomes soft but not too brittle so that it cannot be woven. Once it is done, two to three strands of soma are hand rolled to make it thick and sturdy and then the long strands of fibers are hand woven to make the shoes. To make them attractive and colourful, coloured threads are intertwined in the fibers to create designs, especially on the upper part of the shoes covering the toes. Sometimes some strands of soma are dyed with colors from Manali or Kullu. However, today coloured woolen threads are used instead. Animal skin is soaked in water overnight and is used for covering the shoes from outside; it is stitched with ‘bhang’ thread. It can take up to 2 to 3 days to finish one Kapula. One of the variations of this traditional shoe is ‘gepul’ in which no animal skin is used.

In Lahaul & Spiti, any pronounced class division based on vocation does not exist and everybody used to make these shoes in the early days and they were also used without any kind of discrimination. However, during the religious festivals of ‘Halda’ and ‘Lossar’, the locals do not wear kapula, which are fitted with animal skin; it is believed that wearing kapula during such sacred occasions will violate the purity of the function. The people devotedly follow this tradition and if anyone violates this tradition, the violator is fined and not allowed to mingle with the other participants; they are served food separately and will also have to sleep in a separate section, away from the others.

Kapula, was once extremely popular among the people, which is evident from its mention in the Guree Geets, the folk songs of Lahaul & Spiti. These colorful Kapulas in the early days were considered very fashionable and attractive. However, the popularity of this traditional form of shoe is on the decline, and has very limited use.

(Link to original blog on High Himalaya Forum)
at November 11, 2012 No comments:

A two-days training event was conducted by TUBAE African Development Trust as part of Praya initiative towards improving quality of education in the underserved areas in Turkana in Rift Valley province of Kenya. It provided inputs to participants on teaching methods, innovative teaching aids and discussed the challenges and concerns faced by the teachers.
at November 03, 2012 No comments: