As part of its healthcare initiatives in remote high altitude villages, Pragya conducted health camps today in collaboration with doctors from Civil Hospital at Layari and Aroshi villages of Urgam valley, benefitting over 140 individuals. The initiative is striving to address the critical need for reproductive healthcare for women in the Himalayan region and improving healthcare access in remote villages.
at January 31, 2013 No comments:

The Fascinating Cave Temples of Ladakh 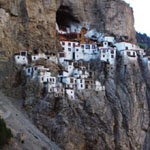 The architecture of Ladakh and Zanskar has a strong Buddhist influence, most seen and associated with monasteries and gompas dotted throughout the region. Apart from these sacred places there are several cave temples that exist here. The majority of the Buddhist caves in Ladakh and Zanskar are associated with Buddhist monks who are said to have meditated in them at some time. These stunning cave temples also reveal a lot about the mystic Buddhist culture and have centuries of history behind them.

Here are some of the cave temples that one can find in these regions:

The twin crags of Spituk
Locally known as Brag-khung Kha-ba-chen (snowy hole in the Crags), white – walled buildings on the left bank of the Indus shelter the two caves, near Spituk. The walls of one cave are completely covered with soot and the solitary recognizable part of a mural is a corner of a mandala (a spiritual symbol representing the universe) on the back wall. In the second cave it is easier to recognize the murals. Three mandalas with decorative motifs and several miniature divinities are clearly visible.

Hemis Shugpa in Basgo
Hemis Shugpa, named after the juniper trees that grow there, is situated in a narrow valley lying along the ancient track towards the north leading from Basgo to sTing-mo-sgang through a narrow gorge. The caves along the mountain ridges offer a splendid view of the Indus valley. There are two stucco images of Naropa and Padmasambhava. There are two chortens (stupas) below the cave and a juniper tree, which is believed to be inhabited by a serpent deity.

The Pentad of Saspol
A group of caves are situated above the village - Saspol near the ruins of an old fort. Among the group of caves, the first is dominated by a mural of Sãkyamuni, repainted in unskilled hand in later years. The cave also contains other murals of Sãkyamuni, Avalokitesvara, Akshobhya and Vajradhara, miniatures of a thousand Buddhas and two large murals of Padamasambhava and Maitreya. The second temple has murals of Sãkyamuni and ElevenHeaded Avalokitesvara, of Tsong-kha-pa and five Buddhas. The third cave is the largest in size. The murals are in good condition and represent a variety of divinities. The main murals are of Bodhisattvas, Vajrapani, Amitãbha, Avalokitesvara, Atisa, Chos-kyi-skyabs, and many others. The fourth and fifth temples have murals of preaching Buddha and mandalas but are gradually disappearing as the loose moraines are sliding down hill. The caves are completely open and the murals can hardly be recognized.

Other wonders
Phokar Dzong is situated in a wide valley surrounded by mountain peaks near village Shargola.
Wakha cave temple is situated in a crag above the village with a steep flight of steps leading to the cave. Inside the cave there are block prints of Tibetan canon and images of Avalokiteswara, Sakyamuni and Tsong-kha-pa.

There is a small cave containing images of Tillopa, Naropa and Mi-la ras-pa. According to legend, monk Naropa meditated in this cave and he dried the whole valley, which was a great lake, before founding the monastery.

Go-tsang-pa cave in Hemis is a small cave at the top of a gorge that lies behind the monastery. There are five images inside the cave along with a beautiful mural depicting a hunting scene from the life of Mi-la ras-pa. The walls near the entrance have murals of Mahakala and Remati, a female deity.


Near Nimmo, there is a boulder with a cavity resembling the shape of a human body. According to local legend, this was formed when Guru Rinpoche or Padmasambhava clung to the rock as he was pursued by a demon during his journey through Ladakh. However, it has become a religious site for the Sikhs.

The Spectacular Rock Carvings
Rock carvings around Ladakh provide an interesting area of study of the local cultural history. The rock carvings are of three types: simple drawings of men and animals, pictures of chortens and written inscriptions. They are found in river terraces near Saspol, Alchi, Khaltse, Nurla, between Leh to Nimmo, also across the Khardung-La pass where Nubra and Shyok rivers meet.

The figures engraved include the usual humans and animals (ibexes, goats, deer) and are presumed to be from pre-Buddhist era. The temple of Alchi has inscriptions in “dbu-can” script. The engravings near Tirith village, are astounding as they are not merely drawings and the themes go beyond commonplace. These are on a rock on the left bank of the Nubra. The carved deities are still clearly discernable, with most of their details intact. One of them has a sword and the second, a rosary.

Unfortunately, in some cases, physical damage from weathering and lack of maintenance has fragmented the texts and sometimes the writers' mode of expression is too oblique to understand the details. The rocks are deeply inscribed to distinguish the drawings or letterings by relief, or scratched away to reveal the letters against the contrasting surface colour of the rocks.