3rd Anniversary of the Uttarakhand floods

17 June marked the third anniversary of the Uttarakhand floods that killed more than 5000 people and left the infrastructure of the state in shambles. The intensity of the floods was such that the state government has not been able to arrive at a number of ‘official’ deaths in the disaster, with many families of the deceased yet to receive a death certificate.

In the aftermath of the disaster, a report by the National Institute of Disaster Management (NIDM) has indicated that unregulated construction of dams in the Alaknanda and Mandakini basins, along with adverse weather conditions, could have led to the flooding.  Human intervention is increasingly seen to be the cause of disasters in the Uttarakahand, with recent reports that the fire in April 2016 leading to a large-scale destruction of trees and forest cover could have been man made.

Despite the widespread destruction of infrastructure and huge toll of the floods in the state, there are signs of recovery: people are making their way back to the pilgrimage site of Kedarnath, and the ‘Valley of flowers’, a popular tourist destination, opened to the public for the first time in 3 years. There are untold stories of the strength and resilience of survivors in the face of calamity, everyday individuals building their lives from scratch, after they saw it washed away three years ago.

Pragya has been working to rehabilitate the livelihoods of the people in the areas that are worst affected by the floods, by providing the people with alternate sources of income, in a state whose economy is geared toward revenue from tourism. We are also piloting a grassroots, citizen - led early warning system to be implemented in the districts of the Uttarakhand in the coming year. 3 years on, we remember all the people who lost their lives in this tragedy, and the lessons remain clear: concerted conservation efforts and minimizing human intervention in the environment are a necessity if we are to avoid tragedy on such a scale in the near future. 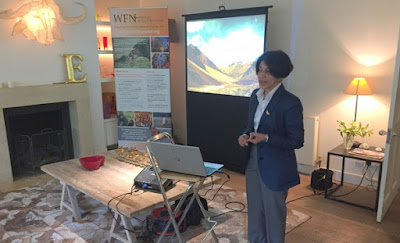 In the year 2000, Ms Gargi Banerji was awarded the Whitley Gold Award for her efforts, as the Director of Pragya, toward the conservation and cultivation of medicinal plants in the Indian Himalayan region. The award brought us international recognition, allowing us to expand the scope of the project, which received continued funding in 2003 and 2005. We collaborated with the Whitley Fund for Nature (WFN) in a landmark five-year ‘Water Access and Wasteland Development project’ that was completed in 2011.

Ms Banerji visited the Whitley Fund for Nature in London this June, 16 years after being conferred the Whitley Gold, to deliver a talk on the work that Pragya is doing; the interleaving years have seen Pragya increase the ambit of its work to integrate livelihood & social development, rights & welfare, and critical technical interventions in the management of natural resources into its projects. Our growth has been mirrored in the long list of individuals and conservation projects associated with the WFN today - a testament to its influence.

Pragya has long been involved in the Himalayan region of the subcontinent, and when the region was struck by a series of disasters - the Uttarakhand floods of 2013, the J&K floods of 2014, the Nepal Earthquake of 2015 - we immediately moved to mobilize resources to provide rescue and relief. Our experience of work to provide relief in the aftermath of each of these events deeply impressed upon us the need for a comprehensive, grassroots plan to mitigate the effect of disasters, an aspect that was highlighted in the framework adopted at the World Conference for Disaster Risk Reduction (WCDRR) held in Sendai, Japan in 2015.

In the remote rural regions of the world, the rampant destruction of the environment is only heightening the effects of disaster. In a world where the frequent disasters due to climate change is a reality we all face, and not the myth it was taken to be a few decades back, preparing for the next big ‘event’ is not enough. At Pragya, our goal has remained the same: to work for the conservation of sensitive ecosystems and the development of the marginalized communities, who are most affected in the event of a disaster. Our preparations to meet the challenges of natural disaster have to integrate conservation efforts to mitigate, and reduce the risk from disaster.

Addressing the WFN, Ms Banerji spoke about Pragya’s work at the grassroots in this regard, working with members from the local community to reduce the vulnerability to disasters by piloting an ‘Ecosystem-based Disaster Risk Reduction Approach’ that uses conservation efforts to increase the health of local ecosystems in a bid to naturally reduce the effect of disasters.

A brief overview of the Disaster Management System in India 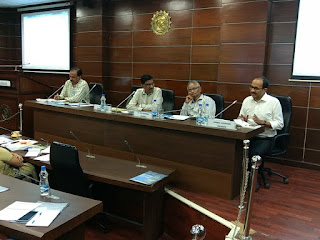 India is a disaster-prone country, unique in its disposition towards the elements: a prolonged drought and heat waves of record-breaking temperatures are followed, or even co-exist with floods due to heavy rainfall in parts of the country. The focus in India has been of relief and rescue after the fact of disaster; the legislation establishing government agencies were enacted after the occurrence of a major natural disaster.

The UN Climate Change conference in Paris, France and the third world conference on Disaster Risk Reduction (WCDRR) held in Sendai, Japan in 2015 addressed the threat posed by climate-change and natural-disasters. The National Disaster Management Plan (NDMP) released by the Prime Minister on 1 June 2016, which focuses on all the phases of disaster management - prevention, mitigation, response and recovery - is a step in a new direction.

The framework of the DM Plan of 2005 established a response-centric, bureaucratic system that relied heavily on national level response, with the local institutions inadequately prepared to immediately respond to the challenges of natural disasters. This was evident in the floods in Uttarakhand in 2013 and the Chennai floods of 2015, where the effects of the disaster was heightened by reckless development, lack of early-warning systems or risk mapping.

The NDMP, with its emphasis on reducing risk and mitigating disaster, means that India has voluntarily put the Sendai Framework for Disaster Risk Reduction into action. Another key aspect of the NDMP is the integration of risk reduction at all levels of the government, and more importantly, an increased engagement with civil society and grassroots organizations working in the field of Disaster Management.

Pragya recently participated in a dialogue organized by the NDMA with members of civil society and other government organizations, where we presented the DMS-Himalaya, a disaster management manual based our experience in responding to floods in Uttarakhand and Jammu & Kashmir in 2013 and 2014 respectively. The recommendations made in the manual, including a grassroots, citizen-based early warning systems are to be piloted in the districts of Uttarakhand in the coming year. 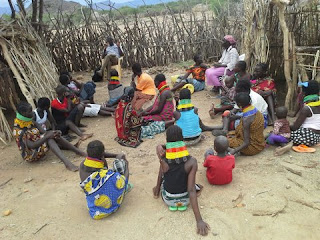 The Laikipia, Samburu and Turkana counties are underdeveloped semi-arid and arid lands in Northern Kenya. The frequent cross-border attacks and raids on livestock by armed tribesmen in the region leads to a high number of casualties and a stunting of development programmes among the pastoralist communities in the region; there is limited access to basic welfare services, most of which have been destroyed in the prolonged conflict. This also has an adverse effect on the health of the women and children.

In recent years, Kenya has performed poorly on indicators of Maternal, Newborn and Child Health (MNCH); the 2014 Kenyan demographic survey shows that infant mortality rate in the country stood at 39 deaths per 1000 births, and the World Bank survey assessed Maternal Mortality Rate (MMR) at 525 for the same year. The widespread HIV infection and the prevalence of practices such as Female Genital Mutilation (FGM) and beading  (community sanctioned rape by a relative) also have an adverse impact on the health of women in the region.

Pragya’s intervention is focusing on the MNCH levels in the area. We are conducting research and holding consultations with local community members to generate qualitative data on the state of existing welfare services, reproductive health & nutrition among women and the potential challenges to establishing peer support networks in the region. The data collected after interacting with the locals, and other participants will be validated at the village and country level. The findings of the study will be collated, analyzed and published in the form of a report.