Kholi - the intricate woodcraft of Uttarkashi 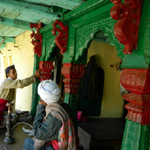 Decades back, the temples and the houses of the rich/higher class people in Uttarkashi could be identified through the majestic looking wooden entrances/doors with intricate designs. These magnificent structures are called Kholi, which was not just a demonstration of their architectural display and richness but it gave an idea about the creative intelligence and technical brilliance of the local artisans as well as religious background of the family living in the house. Kholi is believed to be completely indigenous, with some rumoured influence from Tibet, but has not been validated so far by any study. It is a low height entrance deliberately designed in a way that any person entering through it has to bow his/her head. Traditionally, Kholi was made by the local artisans who belonged to the lower classes of the society. Constructing a Kholi was considered a very religious process that took years to complete and it called for celebration and participation of the entire village.

Kholi is a visual marvel with intricate designs of flowers like brahmkamal, birds like Munal and Gukti and animals like elephants and lions. Kholi also announced the belief systems of the house owners, like suryavanshis (Rana, Chauhan and Bhandari) will have sun’s image carved into the Kholi while nagvanshis (descendents of Gangu Ramola) have images of snakes in the same. The Uttarkashi people have quite interesting beliefs attached to Kholi, for example, the horns of animals are attached in the Kholi to drive away the evil spirits; birds were carved in Kholi mainly because in the early days it was believed that birds are sacred and brings good luck to the family. They deliberately made small holes in the Kholi design in a tasteful way so as to allow honey bees to get inside the Kholi, as it is believed that bees bring luck and blessings and make the house safe and pure.

More than just being an ornamental showpiece, Kholi was also part of the security system in the village. Years back when there were no burglar alarms, Kholi was attached to the signal system in case of burglar attacks in ‘Kothar’, which were traditional storage houses of food grains and other valuables. A string was attached to the lock of the Kothar with its other end tied to a bell inside the Kholi. It was attached in such a way that any person who touches the ‘Kothar’ at night will set the bell ringing, waking up the whole village.

Usually people from rich families opted for Kholi as their houses, since it took at least 2-3 years to make an intricately designed one. It was said that on an average one Kholi was made every ten years in a village, the reasons might vary from the time taken for making a Kholi to affordability among the people. Traditionally, no colours were used to decorate it, but as time went on, people have started using colours to make it more attractive. Earlier, people used to collect trees for building Kholi based on the colour they wanted to have. For example, deodar trees give yellow wood, thuner gives red wood and kel tree gives white wood.

The process of making a Kholi is very elaborate with religious rituals performed along with community participation. The entire process is a classical example of the social interaction of the locals as well as cultural integrity. The process starts with the person who wants to build the house by evoking the village deity to get permission and advice on every matter, from construction area to size of the house to fixing the day to start the construction. The artisans normally start their work in winters as there is enough sunlight and the cool weather makes such hard work bearable. Even cutting the tree for Kholi is a big event with religious rituals held in the village temple and offerings being made to the tree. This is done because of the belief among the locals that if permission is not sought, it may result in accidents and losses. At least one person from each house in the village accompanied and assisted in the process (It is common in the villages in Uttarkashi that whenever there is a big event in a house the entire village participates and assists the family in the event and it is called Rem. Once the work is done, a grand feast was organised before everyone returned home). The trees were usually cut before sunrise and after sunset – before 4 am and after 8 pm.

Deodar or thuner trees are usually used for making Kholi, the reasons being that deodar wood allows for intricate designs to be made and thuner is very durable with a shelf life of at least 200 years. The artisan starts his work after doing religious rituals for the tree and though he is from a lower caste, on that particular day and throughout the construction process he is treated like a Pundit and equivalent to God. The artisan uses traditional locally made tools like kulhadi (to cut the tree and shear off the bark), ari (to cut it according to the measurements), renda, basula (for finishing), thiya, hathodi, gunya and kanasi (instrument used for sharpening the equipments).

According to experts, in the early days there were no measuring tapes or pencils or chalk, therefore these artisans used their palm (blasth in local language) as scale of measurement and used burnt coal to make drawings. To make outlines of designs on the wood, they soaked burnt coal in water and a thread was immersed in it. The designs were using that smeared thread and the design was carved into the wood using the equipments. Gum called ‘dal ki masett’ used in construction of the Kholi was made locally by grinding black grams soaked overnight in water. Even though in the early days no colours were used on the Kholi, later people used natural dyes on it, for instance they painted the colour extracted from the skin of acroot which gave it a purple colour.

The designs for the Kholi are decided upon in consultation with the house owner too. Once the work is finished, Kholi is installed with permission from the village deity. The installation happens before sunrise or after sunset only as it happens in the case of every important event. It is closely followed by Brahmbhoj, a special feast prepared by the Pandit. This is equivalent to the house warming ceremony.

Kholi designs have not changed or evolved since then, but with new and improved equipments the process becomes comparatively easy. Even then, Kholi’s popularity is only going down, with the lesser number of skilled artisans and the ever changing preference of people now constantly in touch with the styles of the outside world. Kholi is still in demand with the hotel owners and outsiders building their houses in Uttarkashi, and they resort to buying old Kholis. Moreover, nowadays an artificial Kholi is used as entrance to the venue of marriages or any such big ceremonies, as they are no longer built in the region.

(Link to original blog on High Himalaya Forum)
at October 16, 2012 No comments: 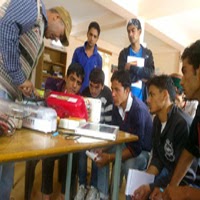 The youth participants cheered for each other as each of them performed completing electronic circuits successfully! The youths were being trained as Rural Technopreneurs to start up renewable energy based micro-enterprises in the district in order to improve energy access in remote villages of Himalayas. With >5000 un-electrified villages, the high altitude Himalayas is one of the least electrified areas in the entire country. The inhabitants meet 60-80% of their energy needs from the dwindling vegetation cover. Uptake of renewable energy and efficient energy technologies in the Himalayas is constrained by lack of awareness and procurement of renewable energy equipments calls for importing from far-away plains areas; maintenance services are not available within the region. The Pragya initiative is striving to create an energy supply value chain with Energy-Shop-cum-Technology-Kiosks as retail outlets for these products to be run by Rural Technopreneurs (read more). The two weeks long vocational training course helped these youth learn installation, sales and servicing of renewable energy equipments. They are now gearing up to form a cooperative and start their venture.
at October 01, 2012 No comments: