Fodder farm and Woodlot in flood affected village in Leh

The village Ney in Leh district was affected by flash floods during August, 2010. Agricultural land and land meant for fodder cultivation had been washed away or rendered unfit for cultivation due to deposition of silt. Salix and poplar plantations of the community, typically used for fodder as well as fuelwood and timber, had likewise been uprooted and washed away in the floods. As a result, the community faced acute shortage of both green and dry fodder all through 2011. They were forced to buy fodder from other villages incurring considerable costs on transportation. Some were forced to sell their livestock as they could not provide adequate fodder to the animals. Following the disaster, the community’s priority was of reinstating their livelihoods and food production systems, and hence much of the year 2011 was spent on reclaiming their agricultural lands, with little attention paid to fodder cultivation or timber/fuelwood plantations. Relief supplies of fodder and fuelwood by the government helped them meet their requirements during that year, but the community realized that such government aid would not last long and efforts towards a permanent solution would need to taken up very soon.

In May 2012, Pragya intervened in the village to establish a fodder farm and community woodlot. Women in the village took up the initiative and identified suitable land owned by the village council (panchayat) for setting up the fodder farm and woodlot. A village meeting was convened and the proposed use of the village land discussed, the council’s permission sought for taking up cultivation on the land, and the plantation details worked out, viz, species to be planted, numbers of saplings/area under specific species, beneficiaries of the produce, and the community members to be engaged in the plantation activity. It was decided that one acre of community land was to be used for the purpose and the produce would be available to the 30 households that had lost all their personal fodder or fuelwood source as a result of the floods.

The land was made ready for sowing with the involvement of one member of each of the beneficiary households in the Ney community. 5 kgs of alpha alpha seed (Medicago sativa) were sown and 250 saplings of Salix and 150 saplings of Poplar were planted in early summer. By October, the beneficiary households had harvested the fodder twice and were able to feed their cattle with healthy green fodder. Women of the village have formed a CPR (Common Property Resource) group and take turns in management of the plantation, including activities such as irrigation, tending, harvesting. The woodlot is estimated to take about 3-4 years to provide benefits to the community, although the leaves of the Salix and Poplar could be harvested for use as fodder to harvest. from the second year onwards. 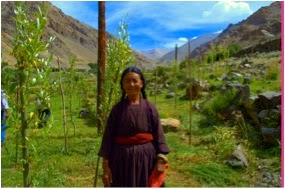 Sonam Yangdol (Female; 63 years), one of the members of the women’s CPR group in Ney, and a beneficiary of the fodder farm and woodlot, says that she could provide fodder generated by the plantation to her animals during much of 2012. The good quality green fodder (as against the dry fodder provided as relief) has also resulted in a 1-1.5 litre increased yield from the milch animals, over the previous year as well as an improvement in animal health. The women’s CPR group, she says, plan to double the area under the plantation in 2013, so that their fodder & fuelwood requirements are met wholly from it.

(More about Pragya's work on rehabilitation)