Kesar Saga - An Epic from the Himalayas 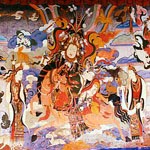 The Kesar Saga poem is an eleventh-century Tibetan epic about Kesar, the King of Ling. The story became the national epic of Ladakh, and it is so much a part of the region’s cultural landscape that some claim that Kesar was actually born in Kargil. A god incarnated, Kesar announces at his birth his identity as the Lion King. He will inevitably confront the evil Trotun who has long ravished the kingdom. To avoid a prophecy of his defeat at the hand of a magical king, Trotun convinces the nobles of the land to exile Kesar, and the hero consequently suffers many hardships. Through his own quick-wittedness, the help of the gods and magical means, Kesar eventually achieves his goal, overcomes evil and brings unity and prosperity to the kingdom of Ling.

The Saga exists in oral form throughout central Asia, from Mongolia to Ladakh. Different forms exist in different regions, and Ladakh is no exception. Kargil District in particular is said to be home to some of the most highly developed versions of the work.

The Kesar Saga is traditionally heard in oral performance, a feature in common with epic traditions around the world. In the winter months, most parts of Ladakh are closed off from the outside world. Even internally within the districts, movement between villages can be difficult or impossible, and conditions mean that little in the way of outdoor work can be done during the winter. Consequently, entertainment forms a larger part of life in winter than in summer, and one major form of this is oral recitation. Ladakh has tribes like the Mon and the Beda who, though debarred traditionally from many other professions, were in great demand as musicians. The position of the musician then, while not necessarily privileged, was highly specialised, indicating the importance of music in these communities. There are stories of famous epic singers performing the Kesar Saga over a number of weeks, and this kind of recitation (always from memory) must have required very specialised skills. Telling the Saga still involves lengthy sessions, sometimes with dances and re-enactments that are associated with particular scenes, and which surely bring to an even more personal level a story already strongly connected to community life.

In addition to professional performances, music forms an important part of everyone’s life in rural Kargil, and this can make another connection to the epic. Garu songs, sung in Kargil whilst ploughing fields, include verses that are attributed to the Kesar Saga. It seems likely not only that everyone growing up in rural Kargil will have heard the Kesar Saga, but that they will know some of it themselves.

As with many ancient stories throughout the world, the Saga has a central character who is royal, and encounters difficulties in gaining his rightful position and who in the end wins, with the forces of good on his side. The epic identified with Tibet does not reduce its cultural relevance to the people of Ladakh, as international boundaries in the region have always been – and remain fairly – fluid and disputable, whereas the Tibetan cultural influence on Ladakh is firm.

Kesar’s birth is miraculous (it is mediated by the gods, and he is himself part divine), and he achieves great feats as a child. In this he is a typical hero, but the context in which he is set is unmistakeably Himalayan. Beyond the content of the poem itself, the mode of transmission – oral recitation in a village context – binds Kesar and the stories about him to the homeland of those who hear them as children.

King Kesar is a fantastical figure, and many of his exploits are brought about by magic. Sometimes, though, his means are more recognisable to us today. On his way to kill the King of Hor, he uses his cunning skills to overcome a group of enemies:

Then Kesar arrived at a place where nine bridges were tied together, and where 100 soldiers of Hor had to keep watch. Kesar took the shape of a young lama, and caused much rain to fall. He made friends with the soldiers and built a house for them, the roof of which rested on a single post. One night when much rain fell, he tied a silken cord to the post, went outside, and tore the post done. All the soldiers were slain by the falling roof.

As well as showing divine power, Kesar is also an embodiment of divine rightness. Even his wife ‘aBrugma is not spared punishment after she refuses to bear children for Kesar, following the death of the King of Hor. But when justice has been done, she is restored to her rightful place: